Coburg Lake and the beauty of Pentridge’s backyard

Visitors to Coburg are often delighted to discover something that locals have long cherished – one of Melbourne’s finest parklands, the Coburg Lake Reserve, directly opposite Pentridge Coburg on Gaffney and Murray Road.

Now considered of local historic, social, aesthetic and even scientific significance to Coburg and Moreland City, with its stunning Avenue of Honour descending to an expansive amphitheatre space and children’s playground, the park has enchanted generations of nature enthusiasts.

But how did this tranquil retreat come to be?

By the end of the 19th century Coburg was home to 41 quarries, producing many of the stones that would find their way into the construction of HM Pentridge. One such site would become Coburg Lake, when the area now called Lake Reserve was purchased in 1912 and a weir constructed to form a manmade lake contained by basaltic rock outcroppings.

Over the following decade, work continued on the beautification of the site, as the reserve came to embody the efforts of the Coburg municipality to improve parks and gardens with the city during the 1920s. The result was a semi-formal Inter-war era reserve of considerable scope and beauty, largely as a result of the curatorship of Jack Gray and the inspiration of its design.

At its peak, the Lake featured diving boards, wading pools, and a kiosk accompanying the gardens – sadly lost to history. During the mid-20th century, the lake was regularly drained, with one notable occasion turning up a motorcycle stolen in 1944, a broken and empty safe stolen from Coburg’s Grand Theatre in 1945, six truck wheels, eight car wheels, a bicycle frame and an old-fashioned rifle.

Today, there are a number of notable features the park is deservedly famous for, including instances of its vegetation and the heritage elements of its built environment. In particular, the reserve is host to mature examples of English Elms, Monterey Pine, Kurrajong and Desert Ash along the northern bank, with Himalayan Cedar, Common Oak and Canary Island Date Palms on the south side.

Significant built landscape features include the rustic drinking fountain near the main playground, the weir across Merri Creek, and numerous instances of remnant rockery including early bluestone retaining walls, bluestone steps on the northern bank and bluestone terraced steps and spectator terraces where the diving tower and model boat pool were located. 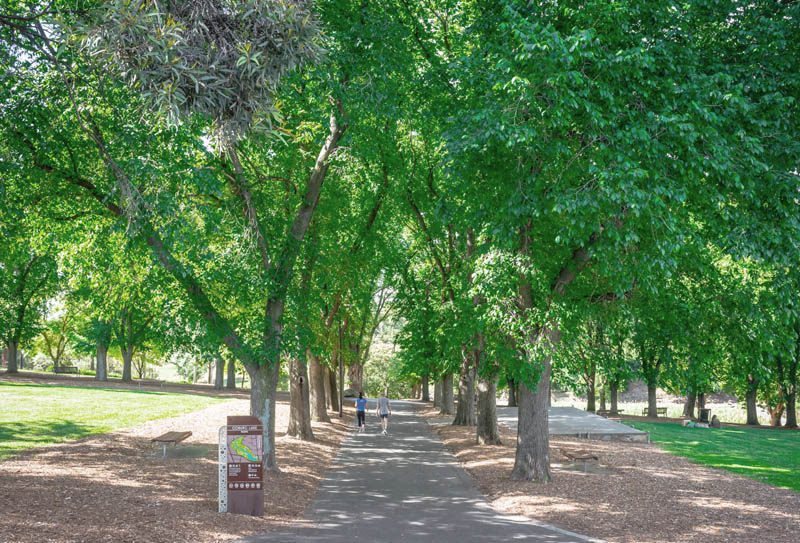 A PLACE TO PLAY AND EXPLORE

If you haven’t explored the reserve yet, it will certainly reward your effort – especially if you have kids in tow. There are numerous trails snaking along Merri Creek to explore, and in addition to the main playground overlooking the lake from the west you’ll also find the artistically playful De Chene Parade Playground and the Doug Hull adventure park looking out over Merri Creek below from their elevated locations.

For those already living at Pentridge in Industry Lane or at Horizon Apartments, having such natural splendour moments away across Murrary Rd really confirms the lifestyle advantages of this little pocket of Melbourne’s north.

And with plenty of shade, picnic tables, BBQs and even wooden recliners along the lake bank, there’s no better way to spend a summer day exploring than in your own backyard at Coburg Lake Reserve.