Scenes from a Heritage restoration

An interview with Bryce Barker of JBM Group

If there were one person for whom Pentridge has loomed large in their mind these last couple of years, it would be Bryce Barker of construction company JBM Group. Over that time, Bryce and JBM have been tasked with restoring significant parts of the old Bluestone College to their original heritage fabric, as identified in the Conservation Management Plan prepared by heritage conservation experts at Bryce Raworth.

With JBM Group now putting the finishing touches to their work restoring the notorious H Division’s Rock Breaking Yards, we felt it was the perfect time to touch base with the man who has spent so much of his time bringing the heritage bones of the old prison back to health. It’s a project that has evidently had an impact upon his life and work.

‘We feel extremely privileged to stamp the JBM Group name on this great opportunity,’ says Bryce. ‘We’ve not only restored a part of Coburg – and Melbourne’s – early history, but we’ve forged strong and lasting relationships with the Shayher team. We also owe special thanks to Rob Cogoi and the boys on the ground, site managers Marty Ryan and Harley Ryan.’

Bryce became part of the project back in 2015, when JBM Group first devised the scope of the work for the repairs and restoration of all the heritage-listed builds, including B Division, A Division, H Division, E Division and the Former Wardens’ Quarters, ‘all in line with the Heritage Victoria permit requirements.’  He quickly came to appreciate the unique character of the former gaol. ‘It’s surprising, the actual quality of the original craftsmanship,’ he observes, ‘particularly the accuracy of the building and how it sits in a true N-E-S-W (North, East, South, West) configuration.’

One notable discovery related to the large copper sphere adorning the weather vane atop A Division’s light tower. Restored now to its full glory as part of the 3m high weather vane, Bryce relates how when the 600mm diameter sphere was removed from the roof in the process of restoration, they found it bore a large bullet hole. ‘When we removed it, the large remains of the bullet fell out’. 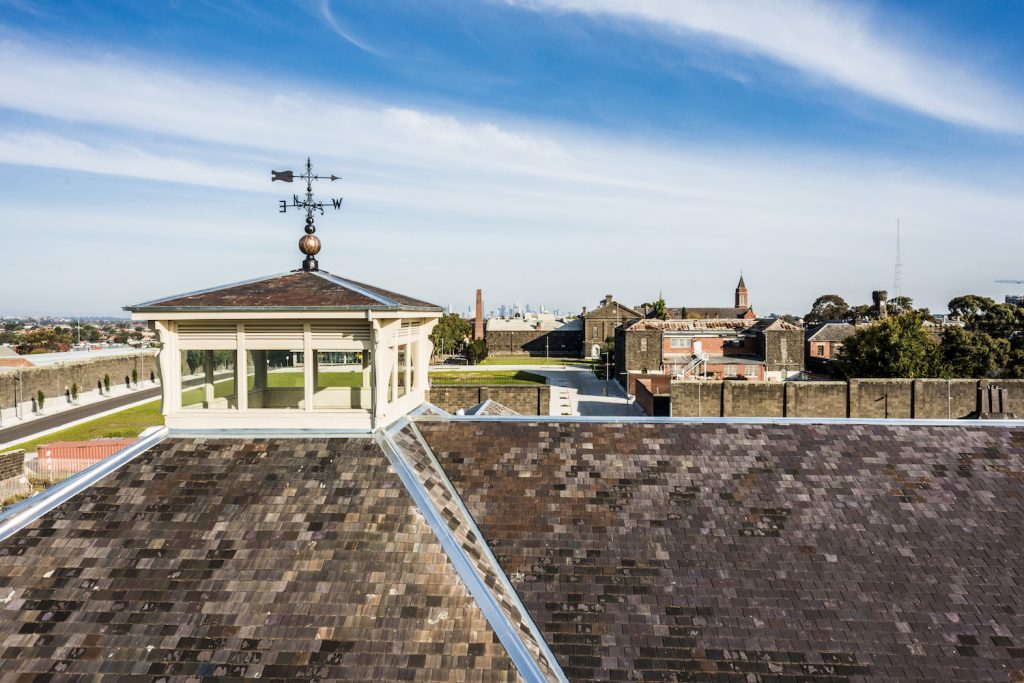 HITTING THE BOOKS FOR THE ROCK BREAKING YARDS

Out of the restoration of A and H Divisions roofing, the Guard Tower restorations and the restoring of the historic Rock Breaking Yards of H Division., Bryce is particularly proud of the Guard Tower restorations along Pentridge Boulevard. ‘To me, these just look fantastic. All my guys involved from Logic Building Services, Tink stone repairs, Normac windows and of course the team at JBM Group put many, many hours into the finished product. They look just perfect.’

To overcome these hurdles, JBM Group did their homework. ‘We had items such as the diamond woven mesh to the Warden’s gantry flown out from Detroit, USA, and we had to research the correct workings of the locking mechanisms as these too had very limited documentation.’ The perseverance of the team paid off, however. ‘One of my favourite items we had to recreate to match was the cast iron flooring that now sits perfectly in the H Division upper walkway. It’s almost impossible to pick the new from the old.’ 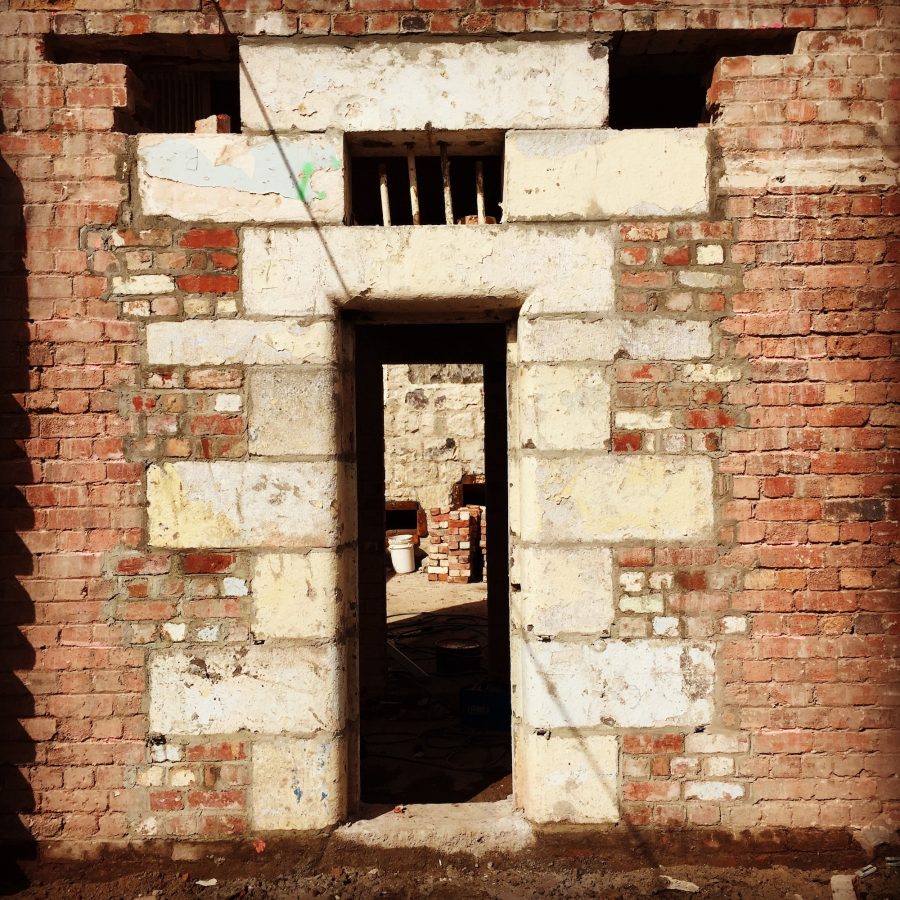 THE PERSISTENCE OF THE PAST

With so much time spent on the site, it begs the question whether the team encountered any of the restless spirits alleged to haunt the former gaol. Bryce recalls his first winter on the site. ‘I had to open and close the doors to H Division to allow for works to get going each day. I’d start at 6am, when it was still pitch black. Walking through the corridors all alone with wind howling over your shoulder and the faint sound of birds fluttering sure did raise the hairs on my neck a few times!’

Beyond the atmospherics, however, Bryce remembers other unnerving experiences. ‘There were a number of times that I would lock up at 3.30pm – a full lockdown, double padlock on each entrance. I’d arrive the following morning to unlock, and see that the same two or three cell light were always back on. I’d personally switched them off. That was always little scary.’

When asked what working with heritage crafts and materials has revealed to him about modern building, Bryce is reflective. ‘The thing we’ve come to understand is that time is definitely a key factor in this type of building. You need to understand the methods of the craft. Everything takes a lot longer than current day construction, and in order to achieve the correct results you need to spend almost as much time researching the particular items as you do building them.’ 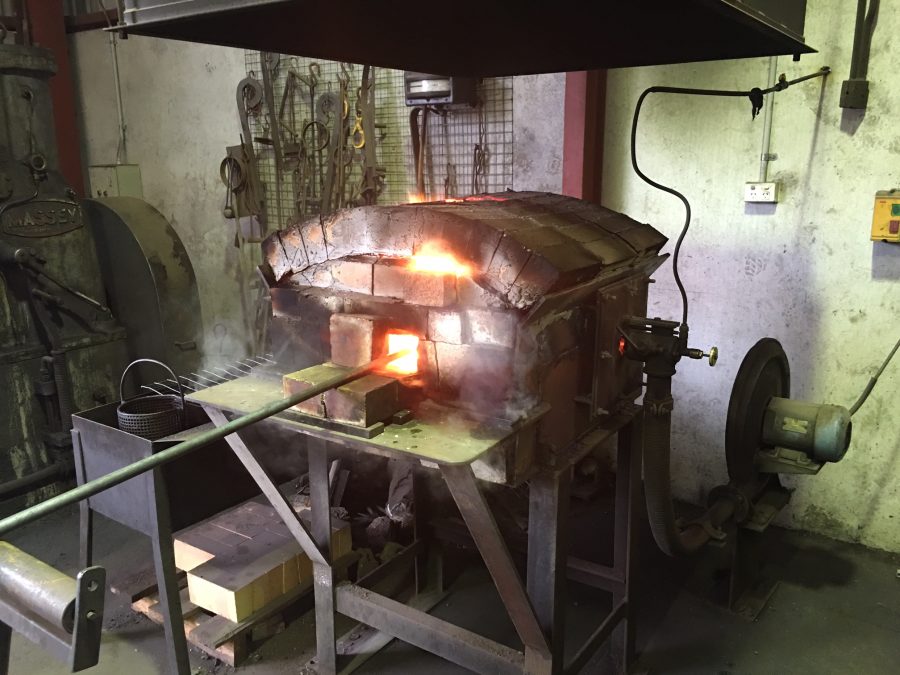 HERITAGE FOR GENERATIONS TO COME

That attention to detail has certainly paid dividends however, with the restorations giving a unique window into how the work would have presented when newly built. And it has inspired JBM Group to do more. ‘I think after successfully completing this project at Pentridge, we’ll definitely develop a devoted team within our company to the heritage restoration of Melbourne and Victoria.’

For Bryce, it’s about more than just work. ‘We’re currently working with some other heritage-listed sites in line with restoration requirements. It’s extremely important for these buildings to be restored back to their original fabric. There’s a story to be told. Tomorrow’s kids deserve the chance to understand our beautiful city’s history, good and bad. This also opens up aspects for learning about architecture or building design – it’s just a great place to admire these features.’

So what’s next for Bryce now that this phase has had such a rewarding outcome? ‘After almost one and a half years onsite, personally I might have a holiday!’ he says. Few would deny him that reward for work so diligently done, which – through his efforts and those of JBM Group and other contractors – has restored the fabric of some of Melbourne’s most iconic heritage buildings, to be enjoyed for future generations.

The guiding hands of heritage: Best practice in heritage interpretation

Bringing the art of design to A Division